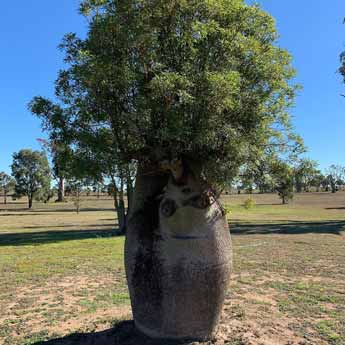 Image of a Queensland Bottle Tree in the wild.

The Queensland Bottle Tree is a stunning, easy to grow specimen tree native to Queensland, Australia.

One of the outstanding features of the Queensland Bottle tree is its bulbous trunk which, after around 10 years of growth, can be as large as 4 metres in diameter. This tree is extremely drought tolerant but ideally likes plenty of water which it stores between the inner bark and the trunk.  This  gives it its unique shape and the reason for its common name of the “Bottle Tree”.

Bottle Trees can grow in a wide variety of soils and aspects and can sustain temperatures from -5 to +45 degrees. They can be used to provide shade from the sun and shelter from the wind. The Bottle Tree is very versatile and easy to grow and will make a fantastic addition to just about any location or environment.

As the Bottle Tree is now a protected species it cannot be harvested from the wild. Therefore, our Bottle Trees are all sourced from sustainable plantations or grown on one of our farms. Our trees are grown to suit the urban environment, being typically between 3 to 4 metres in height.  We have a wide range of Bottle Trees available to suit any budget. They are perfect as a feature tree in any landscape and have a real wow factor!

Do Bottle Trees need much water?

How tall can a Bottle Tree grow?

The Queensland Bottle Tree is an oddly shaped but stunning deciduous tree that grows to around 18-20 metres tall and has a dense, rounded canopy that can reach 5-12 metres in diameter. (Trees may be smaller in cultivation or cooler climates.)

Where can I buy a Bottle Tree?

How can I propagate a Bottle Tree?

The Queensland Bottle Tree is easily propagated from seed but care must be taken to wear gloves whilst extracting seeds as the pods contain hairs that can cause skin irritation. Stem cuttings of semi-ripe growth will root well.

The Queensland Bottle Tree is extremely easy to grow.  It adapts readily to cultivation due to its tolerance for a wide range of soils, aspects and temperatures. It really is not too fussy!

It is best planted as a specimen tree in a space where its spectacular shape can be fully appreciated.  It can also be planted to provide shelter from both the sun and the wind. The Queensland Bottle Tree can also be cultivated indoors and is even used for bonsai specimens.

Bottle Trees grow best in a deep, well-drained, slightly acidic soil (pH 5.5-6.5) and in full sunshine. They transplant easily (it is widely reported that they can withstand intervals of up to three months between digging and replanting, with no detrimental effects!) and minimal soil preparation is required for planting.

Organic matter can be incorporated to the planting hole and a thick layer of gravel or pine bark mulch can be added after planting. Take care not to mulch too close to the stem of the tree as this will encourage rotting. Neither of these actions are absolutely necessary but they both help with moisture retention and mulching can offer a level of protection for the roots during cold periods.

Due to its amazing water storage capabilities, the Queensland Bottle Tree is drought and wind tolerant but it may drop some leaves during dry spells – do not be alarmed if this happens! The healthiest plants are known to grow in areas that experience prolonged dry periods as the roots will grow very deep in search for water.

It is also classed as a second-line coastal plant meaning that it should be able to withstand a moderate coastal exposure but it does grow best when protected from salt laden winds.

The Queensland Bottle Tree is tolerant of light frosts and usually hardy at temperatures down to -5 degrees. It grows at its best within a temperature range of -5 to +45 degrees and is suited to most climate ranges.

The Queensland Bottle Tree requires very little, if any, ongoing care and maintenance. Although drought tolerant it does like to be watered regularly during the summer.

Feeding is not usually necessary unless pot grown, but you can feed with a balanced complete fertiliser once a year typically in spring to maintain vigour. The Queensland Bottle Tree is generally pest and disease free but feeding may encourage lush leafy growth which may attract the Kurrajong Leaf Roller Caterpillar or birds looking for shelter.

Pruning is also not necessary but it will respond well to light pruning if planted in a situation where size or shape needs to be controlled.

The tree can drop its leave prior to flowering typically between the months of September and December. This will result in a new flush of fresh leaves and gives the tree a new burst of life.

The Queensland Bottle Tree is easily propagated from seed but care must be taken to wear gloves whilst extracting seeds as the pods contain hairs that can cause skin irritation.

Stem cuttings of semi-ripe growth will root well and can be taken from late Summer to early Autumn. The application of rooting hormone to the base of the cuttings and use of bottom heat will help to improve the success rate.

Species: rupestris (Meaning living among the rocks – a reference to the rocky hilltop habitat in which they were discovered)

The Queensland Bottle Tree was discovered by Sir Thomas Mitchell and John Lindley in 1848 at Mount Abundance (near present day Roma), Queensland, Australia.  It was named by its discoverers after its bulbous trunk which was described as bottle like or barrel like.

Between 1918-20 it was planted as an avenue feature tree in Roma, Queensland.  Each tree was chosen to represent one of 93 local men killed in the First World War. Roma purportedly has the largest Queensland Bottle Tree in the world measuring over 9 metres in circumference.

It is usually found growing towards the top of hills and it has been seen to grow in shale, basalt, medium to heavy clay, silt , sand and volcanic rock.

The Queensland Bottle Tree is an oddly shaped but stunning deciduous tree that grows to around 18-20 metres tall and has a dense, rounded canopy that can reach 5-12 metres in diameter. (Trees may be smaller in cultivation or cooler climates.)

The outstanding feature of this plant is its unusual trunk which becomes bottle shaped at around 5-8 years old and can measure up to 3.5-4 metres in diameter at breast height (DBH). At maturity, between 5-15 metres of the tree is usually trunk. The bark is smooth and green/grey on smaller branches and the stem of young plants. Mature trunks are generally dark grey/brown with deep fissures.

Leaf blades are narrow and can be deeply divided. They are elliptic, almost finger-like in shape. They measure approximately 4-11cm long and 2cm wide.  The leaves are a glossy dark green on the upper surface and a lighter green underneath. Juvenile leaves are compound with 3-9 narrow, spear shaped or linear lobes. Young growth often has a reddish tinge.

The Queensland Bottle Tree flowers from September to October. Its flowers are bell shaped with cream and red petals that are slightly twisted. The flowers are not especially conspicuous being only around 6-8mm long and 10mm wide but, with 10-30 flowers per panicle, they put on a pretty little show.

Seed pods form and ripen from November to May in groups of 3-5 boat shaped pods which are approximately 30mm long and 10-15mm wide.  They are smooth and brown on the outside and hairy on the inside and each pod contains 2-8 hard, yellow, egg-shaped seeds.

The Queensland Bottle Tree is listed as ‘least concern’ under Queensland’s Nature Conservation Act and is not considered by The Australian Native Plants Society (Australia) to be ‘at risk in the wild’. But, it is classed as a key component and emergent tree species in the endangered ecosystems of the Queensland Brigalow Belt known as ‘semi-evergreen vine thickets’ or ‘Bottle Tree Scrub’. Its range is found to be declining and the health of any trees that remain in cleared areas may also be compromised.

The Queensland Bottle Tree is a host plant for the Mistletoe species Dendrophthoe glabrescens. It hosts insects such as the Pale Cotton Stainer Bug, Harlequin Ladybird and Kurrajong Leaf Roller Caterpillar. The flowers are attractive to moths and its lush canopy provides excellent shelter for birds.

Bottle Tree Scrub is a key habitat for the near threatened Black-breasted Buttonquail.

The tree can withstand bushfires and will respond by flowering and putting on new growth.

As a plentiful source of moisture, Aboriginal people used the Bottle Tree extensively. They carved holes into the soft bark to create reservoir like structures; consumed the seeds, roots, stems and bark; and the fibres were used to make twine, rope and nets. The soft, edible pulp is considered to be energy rich but protein poor.

Queensland farmers often leave remnant trees for shade or fodder when clearing the land and have been known to fell whole trees to feed stock during drought conditions. Occasional cases of nitrate poisoning have led to cattle deaths.